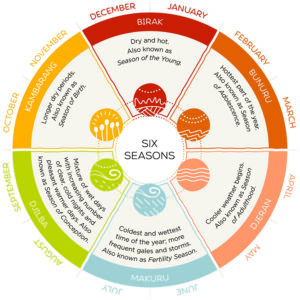 The Noongar people are the traditional owners of WA’s South West region, which is home to the Witchcliffe Ecovillage. The Noongar calendar has six seasons, which more accurately and holistically describe seasonal changes. The six seasons encompass more than just weather patterns, also taking into account changes occurring to flora, fauna, food sources and regular tasks the indigenous people would have traditionally undertaken at different points in the season, such as repairing shelters and making tools.

As a mark of respect to the local Noongar people and in deciding to publish The Village Collective newsletter every two months, we have named each edition after the correlating Noongar season. The excerpt below is taken from the excellent overview of the Noongar seasons on the Bureau of Meteorology website.

The lifestyle for the Nyoongar communities during Djeran

Djeran season at last sees a break in the really hot weather. A key indicator of the change of season is the cool nights that once again bring a dewy presence for us to discover in the early mornings.

The winds have also changed, especially in their intensity, with light breezes being the go and generally swinging from southerly directions (i.e. southeast to southwest). Many flying ants can be seen cruising around in the light winds.

Djeran is a time of red flowers especially from the Red flowering gum (Corimbia ficifolia), as well as the smaller and more petite flowers of the Summer Flame (Beaufortia aestiva). As you travel around the Perth area, you may also notice the red ‘rust’ and seed cones forming on the male and female Sheoaks (Allocasuarina fraseriana). Banksias start to display their flowers, ensuring that there are nectar food sources for the many small mammals and birds that rely upon them.

Traditionally, foods at this time of year included the seeds that had been collected and stored for treatment from the Zamia last season along with the root bulbs of the Yanget (Bullrushes), fresh water fish, frogs and turtles.

As the season progresses, the nights will become cooler and damper along with some cool and rainy days which also means that traditionally mia mias (houses or shelters) were now repaired and updated to make sure they were waterproofed and facing in the right direction in readiness for the deep wintery months to come.